Android apps are all the rage now! Demand for Android apps isn’t going down anytime soon. Because of that demand every code enthusiast wants to develop an android app but how to get started? how are they developed? which language is used to develop? So many questions! Let’s start with a little intro and then dive into app development using web technologies

Android apps are developed in Java programming language. Android studio is the official IDE for android which comes bundled with android SDK tools which are used to build the app.

Apps developed with web technologies which can be built for different platforms like Android, IOS, Windows etc with one code base are called hybrid apps. But, why hybrid apps?

As per Stackoverflow’s developer survey 2015, Javascript is the most popular technology with 54% Javascript developers and Full-stack web developer is the occupation of most developers standing at 32%. So developing android apps using HTML, CSS & JS is a good option as it is backed by a large community and easy learning curve. but it does come with some drawbacks, we’ll talk about that soon.

This post is a series of linked tutorials about all the tools available for android app development using web technologies. Let’s get started with basic info about those tools!

Apache Cordova wraps your HTML web page into a native container. It just places your web page into a webview in an android app or IOS app etc. In simple words, Hybrid app is nothing but a simplified browser which opens a web page in the form of an app!

Hybrid apps can be developed using Cordova alone. To make it more easy, many other tools have been built using Cordova, providing additional functionalities and optimizations. Few of them are as follows.

Adobe PhoneGap framework is an open source distribution of Cordova which provides additional features such as hot reload, remote build and desktop app which can be used to build apps without using command line.

Remote build feature enables you to build apps without having native SDKs installed in your PC. Although hybrid apps are developed using HTML, CSS and JS, Native SDKs are required to build the final target file like APK for android. So this feature would help you to build app on the cloud but comes at a price.

Ionic is the most popular framework for building hybrid apps now. It is built on top of Cordova plugin and AngularJS framework. Read AngularJS for complete beginners tutorial here

Ionic optimizes hybrid apps as much as possible, smoother than other hybrid app frameworks and use of AngularJS is an added advantage for faster development.

Onsen UI is similar to Ionic which is built on Cordova, supports AngularJS and provides predefined UI components which are optimized.

User Experience – Hybrid apps are not as smooth as Native apps, after all it is just a web view. Accessing all the native feature of a device in a hybrid app also has few problems.

In spite of few drawbacks, hybrid apps are way to go for small apps and reduce development costs!

Tech keeps evolving! We have a problem? we solve it by developing something new! To overcome the drawbacks of hybrid apps, few master minds planned to develop a framework which would enable developing apps with Javascript but also use native views which would overcome performance issues. And that framework is React Native.

React native is a framework developed by Facebook which enables you to build native apps using Javascript and React framework. 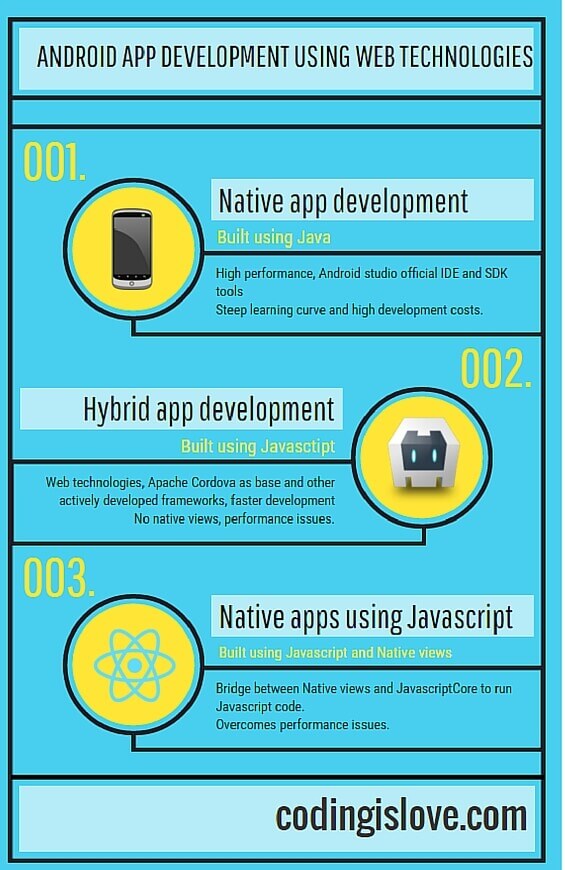 Meanwhile, have a look at official sites of above frameworks and try them once and subscribe to our newsletter below to get notified when these tutorials are live!

If you have any questions or feedback, comment below!

Mobile app developing process is that type of process which can never be going down because in now a days almost every men use different types of apps to fulfill their different needs. So their are competition on high level between app owners. Every app owner want that their app should be very popular. For this every app owner want to choose that type of app developer who develop any type of app by using new strategies according to people’s needs. so this information is very useful for app developers to get knowledge that how to develop apps using web technologies. love this informative post very much.

I am confused with the Android app development particularly hybrid apps as which technologies and framework to use. Most of my queries got resolved after i read your article, thanks

I’m so amazed right now. Thanks for putting this together. I guess I’ll the hybrid and see which I prefer

In today’s world app development is necessary for business. nowadays mobile and android app are more popular than websites. it’s easy to use and approach. Thank you for posting the article, it’s very useful and informative and good for beginner who want to learn

Hi, thank for your share! Building App use the Ionic platform is very difficult. We have to go through a lot of steps, then have to sign App types. Then, up to Google Play and App store. There are so many mobile app development tools out there today it can help you creat an App easier. The tools that I feel perfect Deployapp
http://deployapp.net/

Hi , I have worked on the titanium tool almost 2 years and it was awesome for developing hybrid application using it. it is fully based on the javascript and it contained its own widgets to develop for android, iOS and BB etc.

I think your Complete Focus of Using Hybrid apps. But Native apps are more important than Hybrid in quality like UI/UX, Coding Structure Etc.

Thank you so much for this essential article. Very well explored all fundamental aspects of creating Android apps using web technologies. I’ve found additional information related to this post: https://mlsdev.com/blog/97-how-to-develop-an-android-app

Thanks for sharing, this article is extremely great and helpful it is very useful for developers. Thanks and keep Sharing.

This is informative post for Android App Development Services. Thanks for posting.