As mentioned earlier, Apps script has a lot of integrations available within the Google ecosystem. Apps Script is really good when you want to share and modify data between Google’s products. Let me give you a few examples

These are just a few examples. The possibilities are endless! It’s all good as long as the data is within Google products. Once you want to read or write data outside of Google, however, the problems start.

Let’s say you have a list of employees and their metrics in a google sheet and you want to display it on your company website. How to use Google sheets as a database? This is when Google sheets API comes into the picture!

But It is so damn complex! From Authentication to API endpoints to API response structure, Its a pain in the ass 😅

Here’s a sample response for a simple list with 2 rows of data.

If you are a developer then you surely know that this API response is not really useful!

So what are the alternatives to Sheets API? I’ve tried a few libraries which simplify the API response and provide some useful methods but most of them are deprecated and support only public sheets and also don’t support writing or updating data in google sheets.

Finally, I found this platform called Sheetsu. One platform that simplifies google sheets API to a great extent and helps to use google sheets as a database.

Please use https://sheet2api.com/ as an alternative which has a similar API. Meanwhile I’ll update the article with clear instructions.

Sheetsu is by far the best platform I’ve seen that leverages most of the capabilities of google sheets. Let’s see what features does Sheetsu offer and how we can use them!

We’ll be talking about JSON API and how to use it to build a simple blood donor app via google sheets as a database.

Let’s do it step by step! Learn by doing 😍

That’s It! It is as simple as that in just 4 steps. You’ve converted your google sheet into a Database with Full CRUD (Create, Read, Update, Delete) support API

Let’s understand how Sheetsu’s JSON API can be consumed. This API supports GET, POST, PUT, PATCH and DELETE methods. Data can be filtered using search queries, set the limit and offset for pagination support. It is as good as an actual API with a full-fledged database.

API requests can be secured using API key and can also disable methods if required. Let’s say you want to disable updating and deleting of data then you can disable those methods and you are good to go!

Reading data is just making a simple GET request to the API. Click on the link below to see the response.

Filtering can be done by passing parameters to /search API. Let’s say you want to get all the rows with city name “Bangalore” Then the request would be something like this –

Creating a new row in google sheets via API can be done by making a POST request with row data in the request body and Content-Type header with value application/json.

Multiple rows can be added by sending an array of objects instead. Updating rows can be done in a similar way using PUT and PATCH methods and deletion can be done using DELETE method.

Beginners 👶 who don’t have experience working with APIs might be wondering how to actually use these in a web app or mobile app or website. So I made a simple practical example to help the beginners understand better.

Here’s how it looks. You can check the live demo at Blood donor demo

It’s a simple web app where users can see the list of people who are ready to donate blood and they can also submit their own details for donating blood.

Users can search based on blood group and city. All the data is stored in a google spreadsheet and all new submissions create a new row in the spreadsheet. All this data is consumed using Sheetsu API

Here’s how the spreadsheet looks 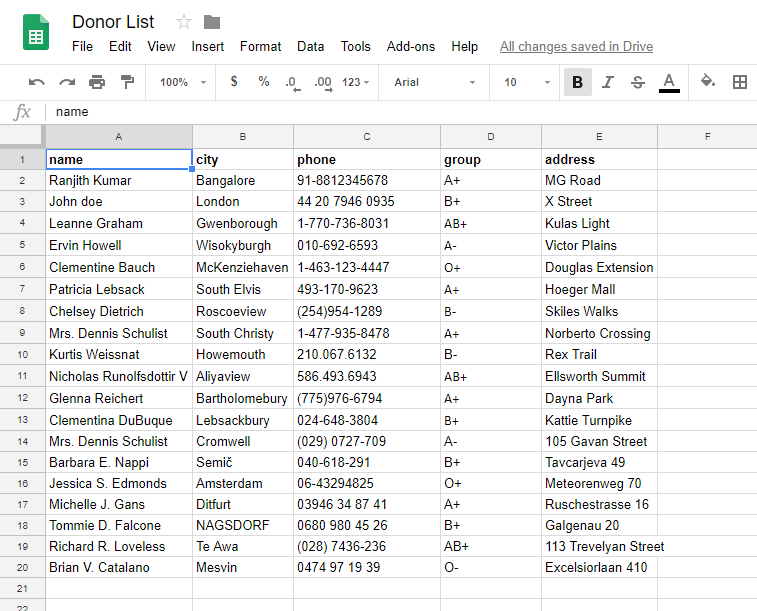 I’ve used Sheetsu’s Javascript web client library to simplify the process of calling APIs. All this library does is make calls to the JSON API as explained in the previous section but it helps a lot by providing simple methods to read, write and query data with as little code as possible.

It doesn’t matter which Javascript library I’m using. This article is all about how to use Google sheets as a database. Let’s go through the code and see how can we consume Sheetsu API in a web app.

Here’s the complete Javascript code for the app.

Look at the search function once.

You can go through the complete code here – https://github.com/codingislove01/blood-donor-google-sheets

When to use Google sheets as a database

Google sheets is not a full-fledged database so when should you use google sheets as a database?

This is a long blog post that I’ve written after a long time 😵 I tried to put out as much information as possible with regard to using Google sheets as a database. If I’ve missed something or if you have any questions or feedback then do let me know in the comments below!

Your article has very unique and reliable information on new topic so i am really impress with your post.

Hi,
I would like to use Google Sheet as a database on WordPress, simply to display the table, without using the Google Sheet embed native system. Do you think this is possible?

Hi William, You can use Sheesu’s table feature for that. Did you check it out?

Thank you for this post but I need some information can I use this code in localhost or my pc server, If possible but how?

Hi Raihan, You can do that. What language are you using for your app?

Thanks for the insights!
I thought about using Google sheets for a project which would hold loads of private data. If I could store that data in sheets from the user itself it would give users ownership over their own data. The only concern I have is performance. What where your experiences on that part? Are queries slow or acceptable?

Hi Tomas, The queries were a bit slow from my experience. I wouldn’t really use google sheets for a private database as well.

Thanks.. I’m struggling up the learning curve. Hoping to be able to use google sheets for a food truck business database.

i tried doing this and i couldnt get it to work, so i copied your code exactly from github to do a demo with yours (using my own sheetsu links and google sheet) and it still didnt work

is that code accurate, the demo doesnt seem to work anymore either

Hi Nick, It wasn’t working because of the free account limits. I have fixed it now, Give it a try

Hi Ranjith, I’ve just read through your article, you did mention about private sheets: will it be possible to GET data from a read only sheet for my python application if the sheet is private? How does it refresh tokens or whatever it must do so that I don’t need to re-authenticate every month? If I have a company sheet that I have readonly access to, can sheetsu get that data?

Hi Jordan, Sheetsu takes care of authentication and refreshing data so you don’t have to worry about that. But I’m not sure If sheetsu works with read-only sheets. Do give it a try. All you have to do is connect the sheet and hit the API URL

Sheetsu is great but limited to only 200 requests a month for free account. Not recommended even for small-scale projects

Hi Rajdeep, I think they recently changed their limits to their free account. I’ll talk to Sheetsu team to get special limits or discounted price for our readers.

Hey Ranjith,
Any additional news on this limitation? I hope Sheetsu has increased the number of searches to more than 200.

Hey Ranjith, great article! Is it possible to have multiple blood types in one cell?

I am looking for a solution to store scan data (thru scanner) in google sheet and before storing to google sheet the data should be validated in master google sheet. Can you please suggest or guide any example.

May I know does Google Sheet has a server? Is Google is their server?

How can I develop an app that tracks an item? My database has been set up on the Google Sheet. When the client type the tracking number, the page will search the Google Sheet and display all the data according to the date

Thanks for all educative write ups. I am highly interested in learning how to create and manage database, I am so new to it but have great skills in excel.
Pls suggest for me what resources to start up so as not to be jumping the gun.

HI, I tried the script and even downloaded the source code but the script is not working.

Can you please help me in creating a script that will remove the blood group type and make location as an only search string to fetch records from your blood group example code.
No formatting required.

Say I have a data in Spreadsheet with Students’ Roll No, Name and Subject -wise Marks. Can I use the above to create a search for Exam Marks based on Roll Nos?

If yes, further can I merge this search with an HTML Page?

Thanks, I’ll update the article with more details on sheet2api

Hi Ranjith sir, I am Ashish, in my google sheets i want to use macros in such a way that it copies B1:E2 and pastes values (Ctrl+Shift+V) in A1:D2. I want this to repeat every minute from morning 9 to afternoon 4pm.
Please note that E1 cell =CONCATENATE(HOUR(NOW()),”:”,MINUTE(NOW()))
E2 cell =GOOGLEFINANCE(“AAPL”,”PRICE”)
Now you understand that im trying to create an intraday chart from the googlefinance live price shown (delay doesnt matter). If i run the macro of {copies B1:E2 and pastes values (Ctrl+Shift+V) in A1:D2}, it shows this :
Error The coordinates of the source range are outside the dimensions of the sheet.
Can googlefinance function not be macro triggered. But if I manually press Ctrl+Shift+Alt+1, that is macro shortcut, it works. but the trigger doesnt work.
Please help I am badly stuck. Your help would be heartily appreciated.

you can use https://faborm.io to submit static website forms to google sheets,