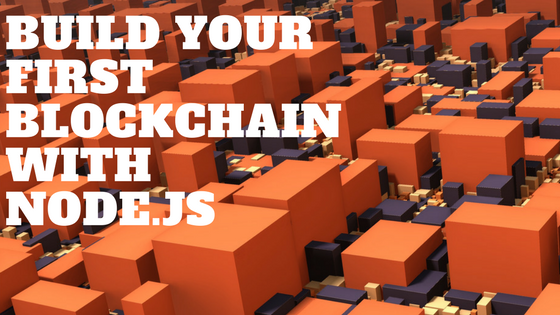 Blockchain is a big buzz word which is heard a lot these days. But it’s like the movie interstellar, everyone thinks its cool but no one really gets it. I personally also don’t clearly understand how blockchain is implemented to solve actual problems. But I know how the data structure works and that is what we will deal with in this blog post.

A blockchain is a continuously growing list of records, called blocks, which are linked and secured using cryptography.

In a blockchain, each node is called a “block” and each block has an index, timestamp, hash of itself, hash of the previous block and of course the data. The data can be anything. In a cryptocurrency, the data is the details of the transaction like sender’s username, receiver’s username and amount.

Blockchain was initially implemented in 1991 to timestamp digital documents, to make sure they are not backdated or tampered with. But it didn’t get much attention as timestamping documents is not as cool as bitcoins.

The special thing about the blockchain is that it cannot easily be tampered with. The hash of each block gives it a unique identity like a fingerprint. And this hash is generated only once when the block is created. It is generated using the values of all the other attributes of the block. So, if any of the values are changed, the hash will no more be valid and hence the entire block will be invalid. So, this way nobody can tamper with the values stored in the block.

Another thing is if the hash is also recalculated, then it will not be detected as tampering. To avoid this, we store the hash of the previous block. This creates a chain of the blocks and if the hash of any block changes, the chain will be broken and the entire thing will be invalid. So, to successfully hack a blockchain, the hacker has to know the location of all blocks and simultaneously change all their hashes and relink the whole blockchain. This is not impossible but extremely tedious as there is a mandatory gap of 10 minutes between each transaction. So it beats the whole purpose of life.

These blockchains are not stored in a centralized server. But the blocks are distributed across the internet and they are connected using a peer-to-peer network. When someone joins the network, they are given the full copy of the network. When they create a new block, the block is sent to all the peers and the validity of the chain is checked. If everything checks out, the block is connected to the chain.

Let’s get to the code

We will be building a simple cryptocurrency called “cilcoin” (coding is love coin). So let’s get started on building possibly your very first blockchain.

First lets test if the block chain is working without any errors. So, outside both the classes, create an object of the BlockChain class and name it CILCoin. Then, add a few blocks to it using the addBlock function.

Go to your console and run this using the command “node main.js”. You should be getting an output like this: 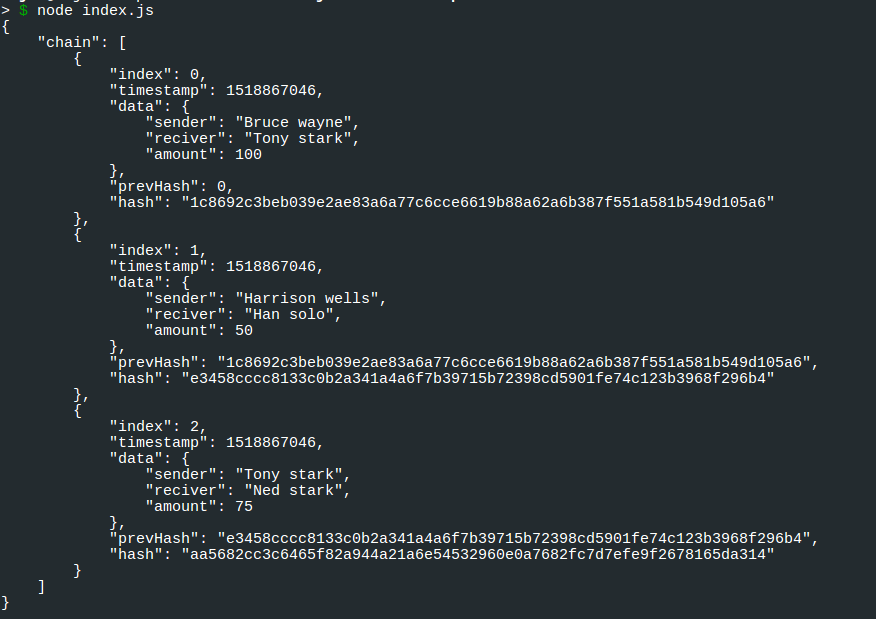 In the first case it will be true and in the second it will be false.

This concludes the tutorial. Hope you understood how this works. Looking forward to decentralization.

Thanks for this article. It’s nicely written and simply explains the basis.

Though is there a more details post you know of which explains the more detailed understanding of book-keeping of more complicated usages like Bitcoin ?

Yes. You can look at this medium article: https://medium.com/@robertgreenfieldiv/explaining-proof-of-stake-f1eae6feb26f

It’s about proof-of-work and other related topics. It’s more advanced. You can check it out.

I’m just learning about Linked Lists and have a question. I thought that the LinkedList data structure was a series of nested objects. If the BlockChain Class described above is storing node objects within an array, is that still a linked list?

no it is not linked list , as for every merkel data in original blockchain it is different .

for more info check blockchain transactions and the height of the trees there is change in the number of front zero very time ..

how to inject sha() function and in node, we are using class structure which is not executed as expected and please share the real snippet for injecting for sha().

OUTPUT:
am getting:
{
“chain”: []
}
Please help for this and am not getting the real data as you have mentioned the article.

hi, you have to install npm package crypto-js

Yes, you are right!
Sorry I forgot to mention

It would be better if you put a working demo of the same.

Thank you for this awesome tutorial Arjun!

I just wanted to mention (for anyone who is getting the Error: Cannot find module 'sha256' function) that NPM is not needed for the Crypto module because it is a native module that is available via Node.js. To include Crypto and to create the hash, all that is needed is this code:

This is what worked for me.

Thanks for helping me to gain a better understanding of what Blockchain is!

thanks for your article.do you have any other materials to study blockchain.some deep learning of it.

i like this blog this is very help full for me

Blockchain technology has become more than a buzzword. It is enabling the development of digital currencies that can stand tall against the fiat currency world we live in. We just need to explore the technology to its full potential and see what we can make out of it. Innovation is the key.